If you really want to get under a Toronto resident's skin, try telling them that you had no idea the city was so huge — that you're shocked by how many people live here and all the shiny skyscrapers we have.

I mean, it's in CANADA, for crying out loud; a country with more beaver dams than people!* How could any Canadian city rival a real American capital?

As any local who has ever faced this line of questioning will be quick to tell you, Toronto is actually bigger than ALL of the U.S. state capitals.

Since 2013, Toronto has actually been regarded as the 4th-largest city in all of North America (Mexico City is number one, followed by New York and then L.A.) Ask literally anyone in Toronto and they'll be happy to fill you in on how we surpassed Chicago nearly a decade ago.

Call it pride, call it pedanticism, or call it what it is — a crippling inferiority complex — but this data point is a key part of the city's modern identity.

Thus, one might be understandably confused and upset upon Googling the largest cities in North America by population and seeing this:

Perplexed, disheartened and a little bit worried that Chicago may have in fact taken back spot number four in the ranking, blogTO reached out to Google to ask why Toronto was showing up in fifth place on their website.

"This feature reflects information from the Google Knowledge Graph, which is our understanding of people, places and things in the world," said a Google Canada spokesperson.

"If we identify instances of inaccurate information appearing, we investigate and take action under our policies," the spokesperson continued. "In this particular case, if you search for the cities on their own (i.e. Toronto or Chicago population) you'll be able to see the data + source."

Toronto residents will be pleased to note that the order in which North America's most-populous cities appear in Google's ranking appears to be inaccurate.

Upon searching for Toronto's population alone, the search engine returns a figure of 2.93 million, based on the latest available government data from 2017. 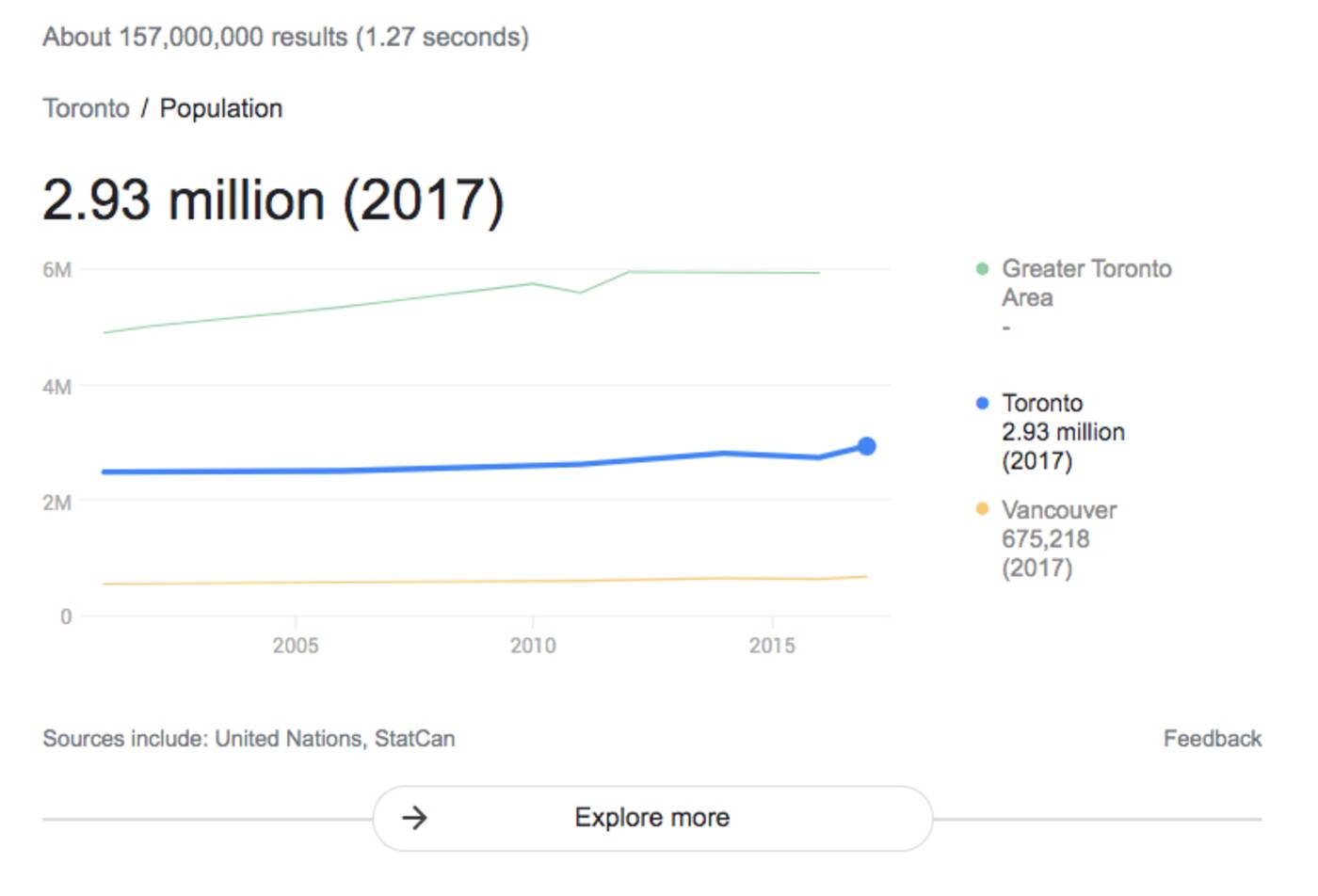 Wikipedia still ranks Toronto in fourth place over Chicago in terms of population size based on data from 2015, and Google's own numbers, when sourced individually, suggest the same.

After explaining the Knowledge Graph thing exactly one week ago, Google has yet to respond to further questions from blogTO about why Chicago comes before Toronto in their visual summary.

The population displayed for Toronto in Google's Knowledge Graph is currently 2.615 million — the recorded number for 2011 — which suggests the all-powerful algorithm simply picked up an older figure.